Guys, guys! Guess what! The library is finally finished! Hurrah! Rejoice, etc. We started working on it when we first moved in two and a half years ago (whoa) and it’s finally, finally finished.

It’s been on my Life List for as long as I remember, and I can’t express enough how much joy it brings me to spend time in this little room.

Oh, before. When we moved in the walls were pale blue paint over stripy blue wallpaper. The skirting boards were SILVER for reasons unknown, there were some strange shelves, an ugly lampshade and an incredibly fugly built in cupboard that housed the boiler (tucked around the corner in this photo). 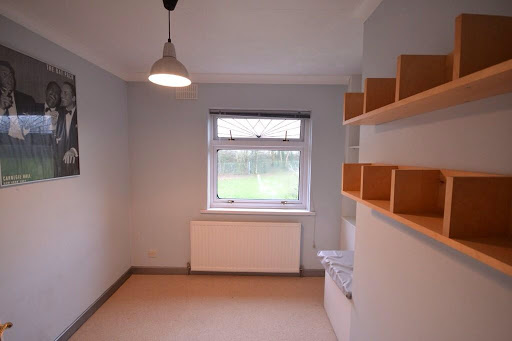 It also had a very charming (and by charming I mean filthy) beige carpet and a window pane that was constantly full of condensation. It was a real winner.

We spent a lot of time and effort stripping everything out – wallpaper revealed lovely pale green paint – and then putting nicer stuff back in. We went for laminate floor that looked a bit like wood (but wasn’t really wood because that stuff is expeeeensive), replaced the window, had the boiler boxed in nicely and painted everything white.

It’s simple but since it was all going to be covered in bookcases I wasn’t really that bothered. 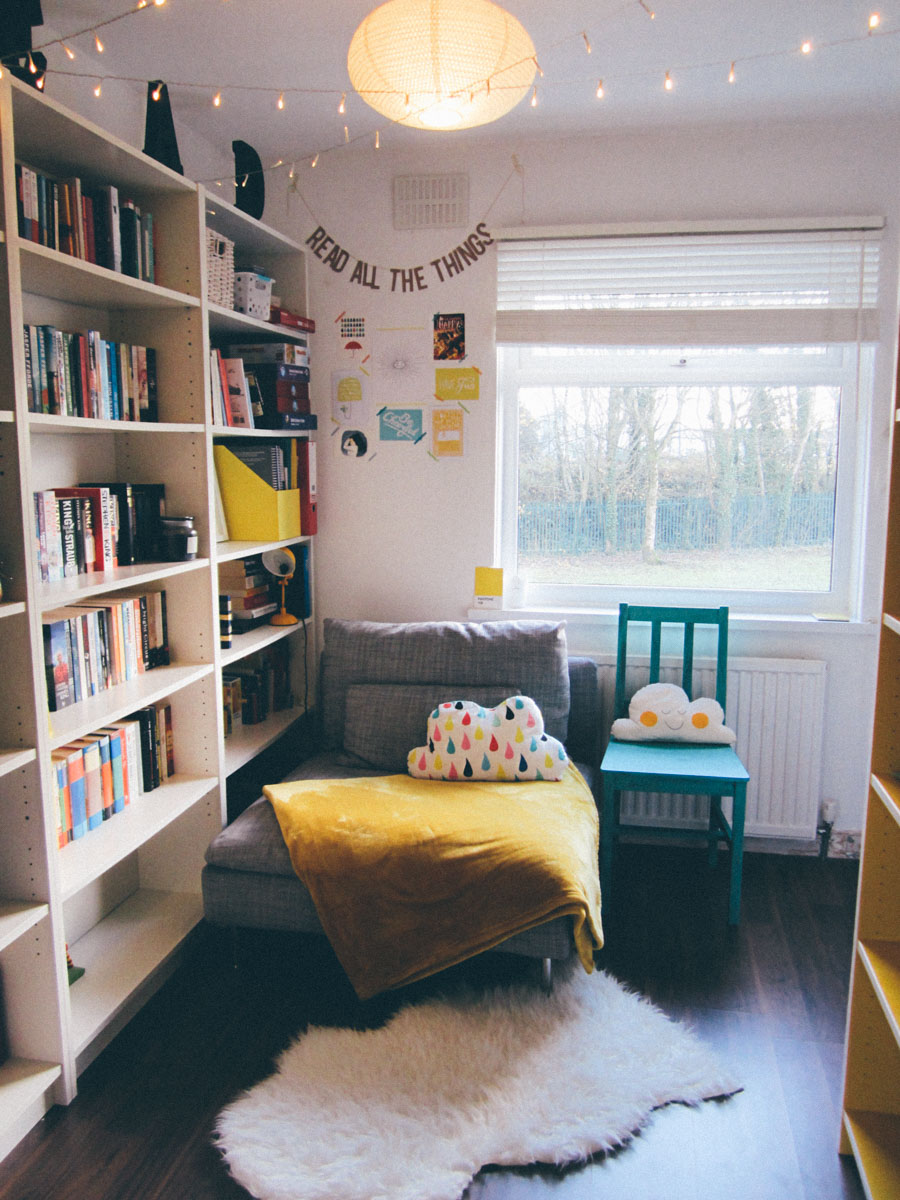 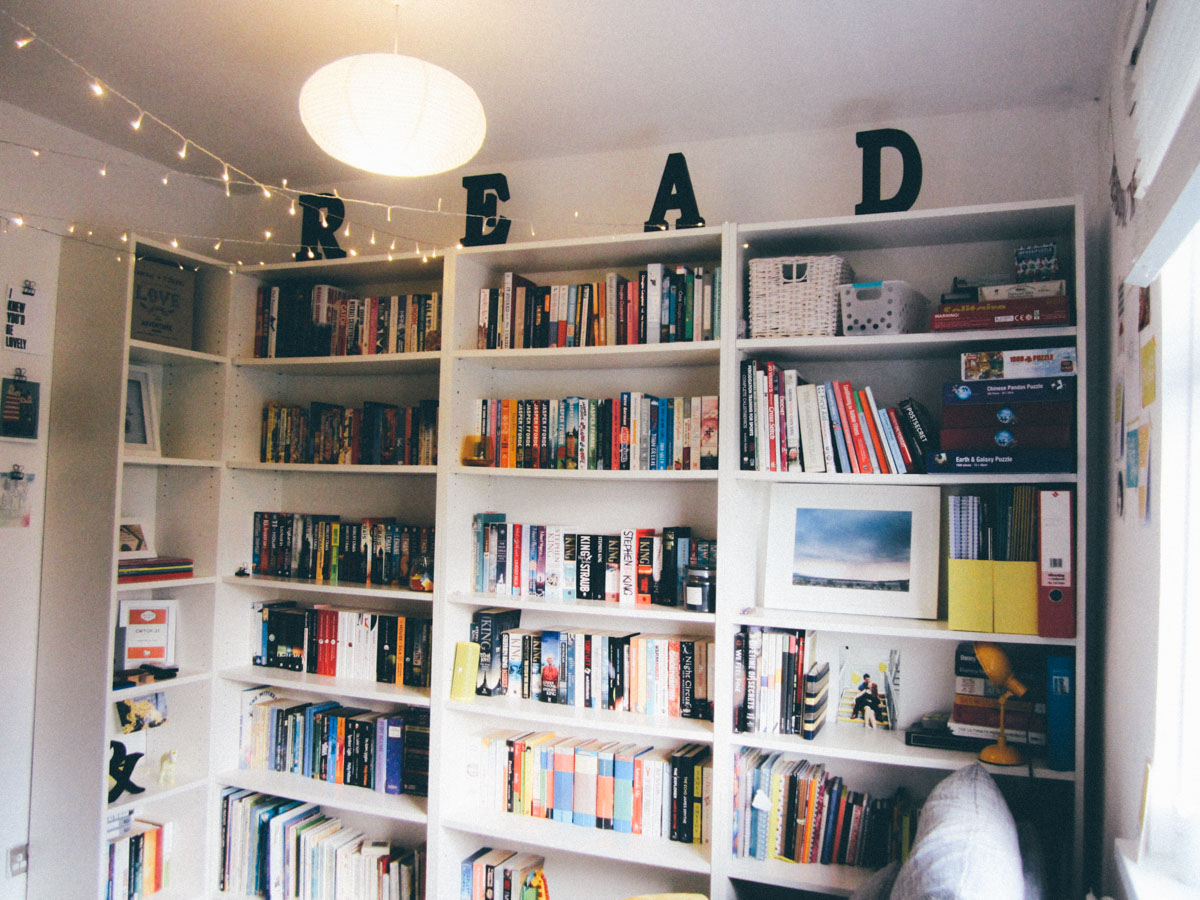 Ta da! Isn’t it beautiful? The answer to that rhetorical question is yes. Yes it is. I’m not going to talk through everything (it would bore me too) but we bought most of the items from IKEA. Billy Bookcases galore, basically. 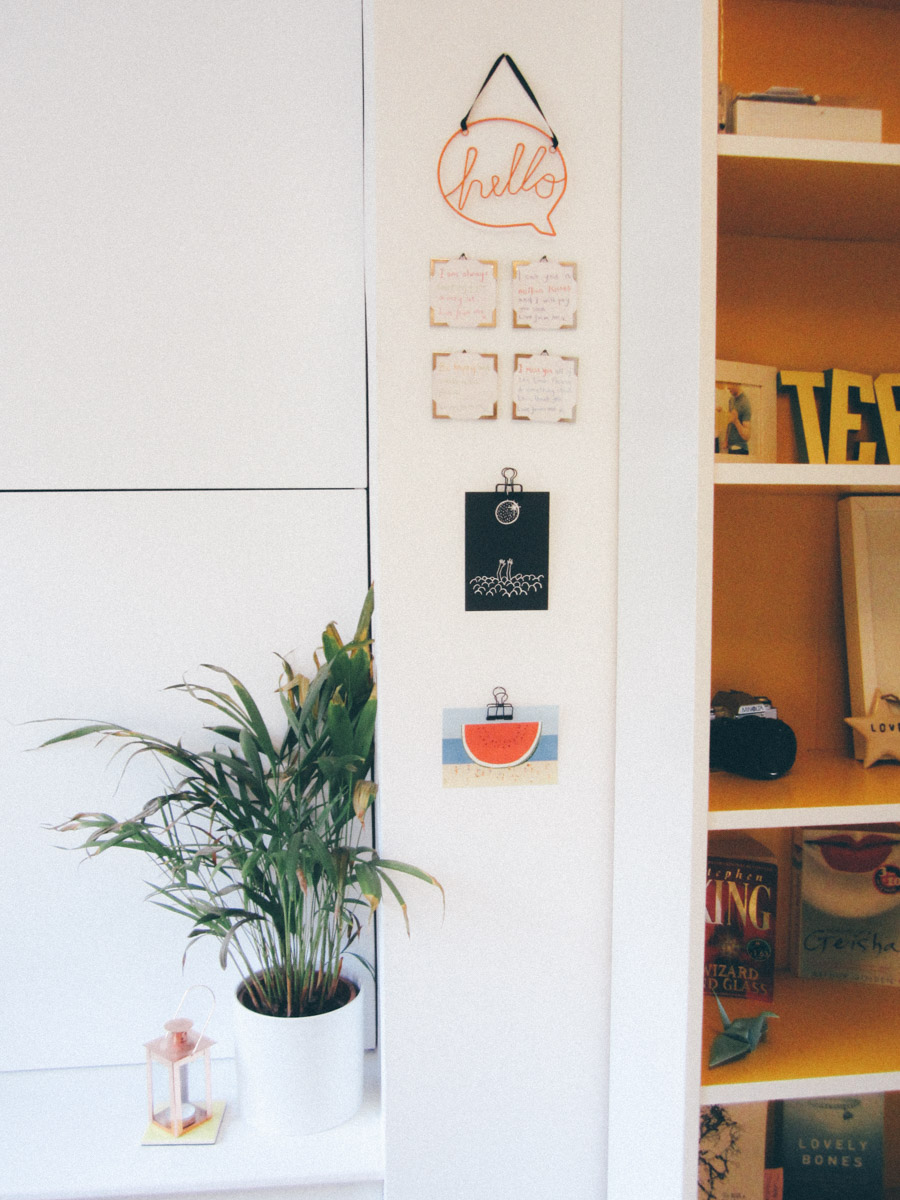 I wanted to add in some interchangeable art so I bought some cute, cheap clips from Tiger and hung up some postcards that were 70p each from Paperchase. Sorted! The little Hello sign was from Primark, believe it or not (their home section has been great this year) and the “love from me xx” signs were bought on Amazon a fair while ago.

Ps. Meet my new favourite candle – Scandinavian Log Fire – which was a bargainous £3 (£3!) from Matalan. I bought three because I love the smell so much and you just know they’re going to discontinue it eventually. (The big R E A D letters are also from Matalan, by the by.) 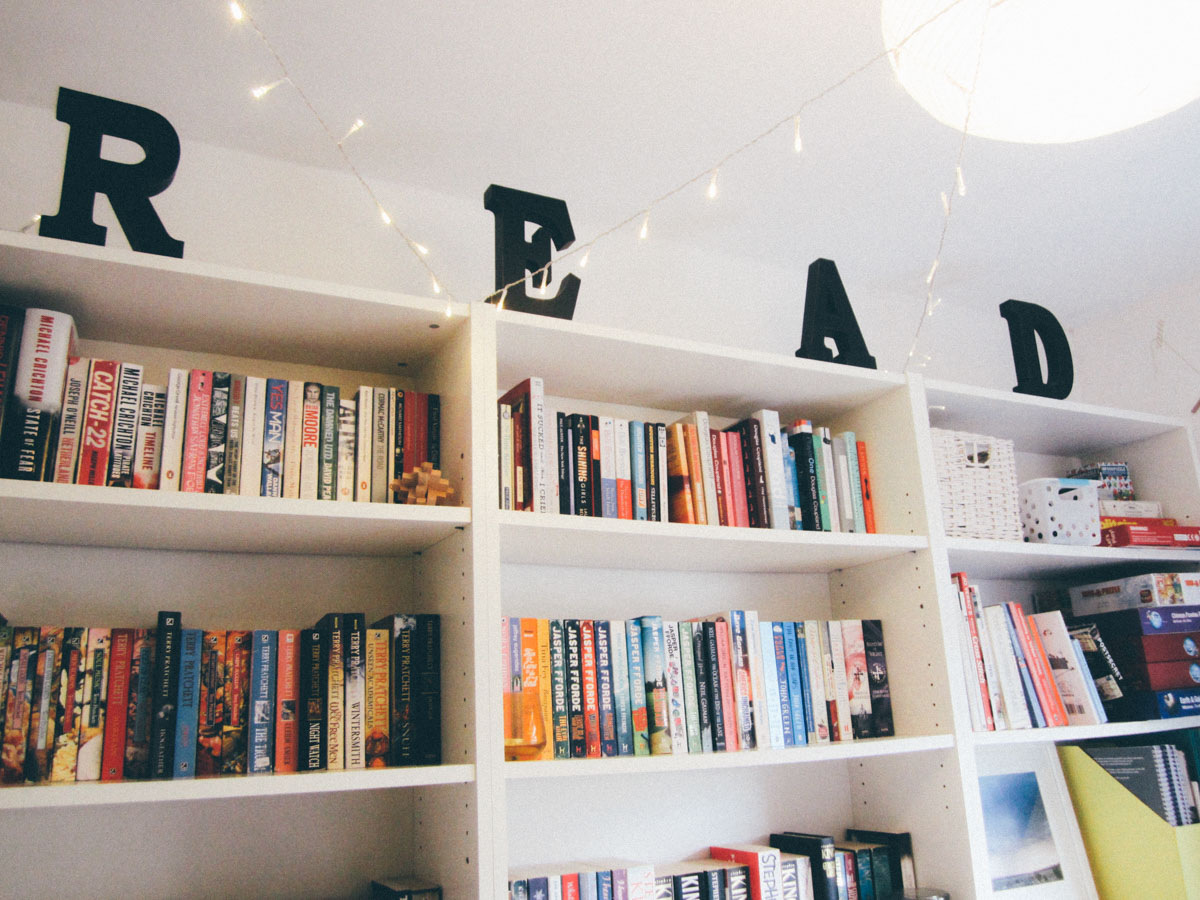 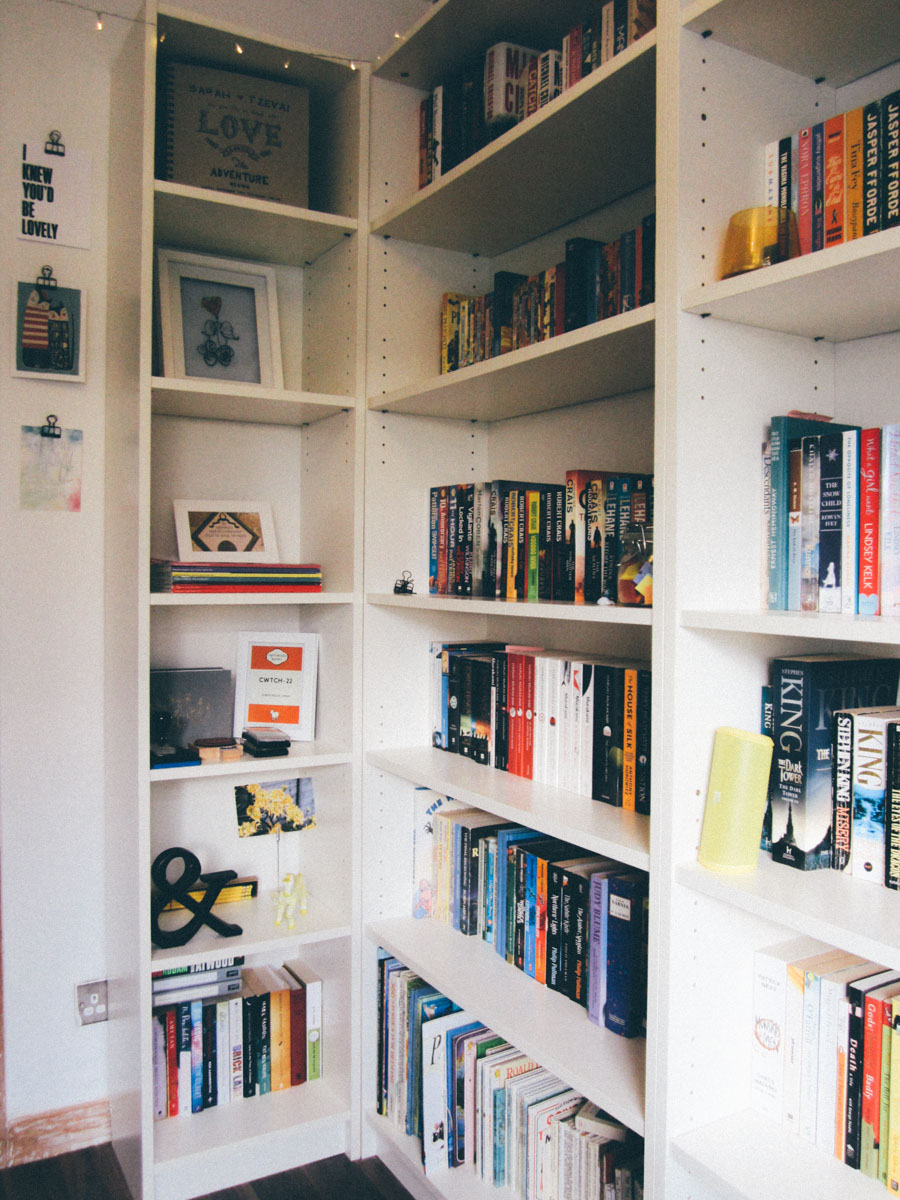 My beautiful BFF bought me an amazing set of yellow pencils that take pride of place on the ‘not books bookshelf’. I also have my ‘this book belongs to’ stamp (flipped so you can read it!), my print copies of Télégramme. 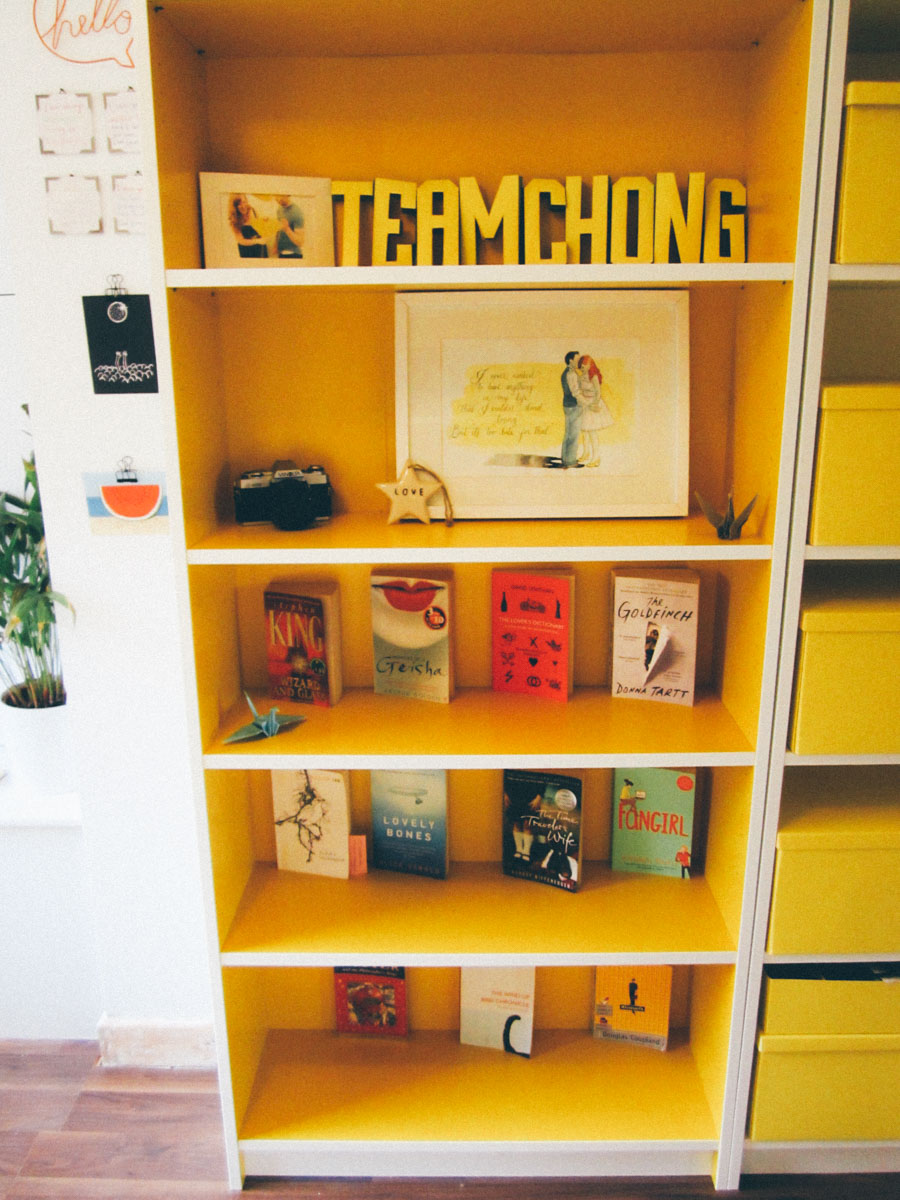 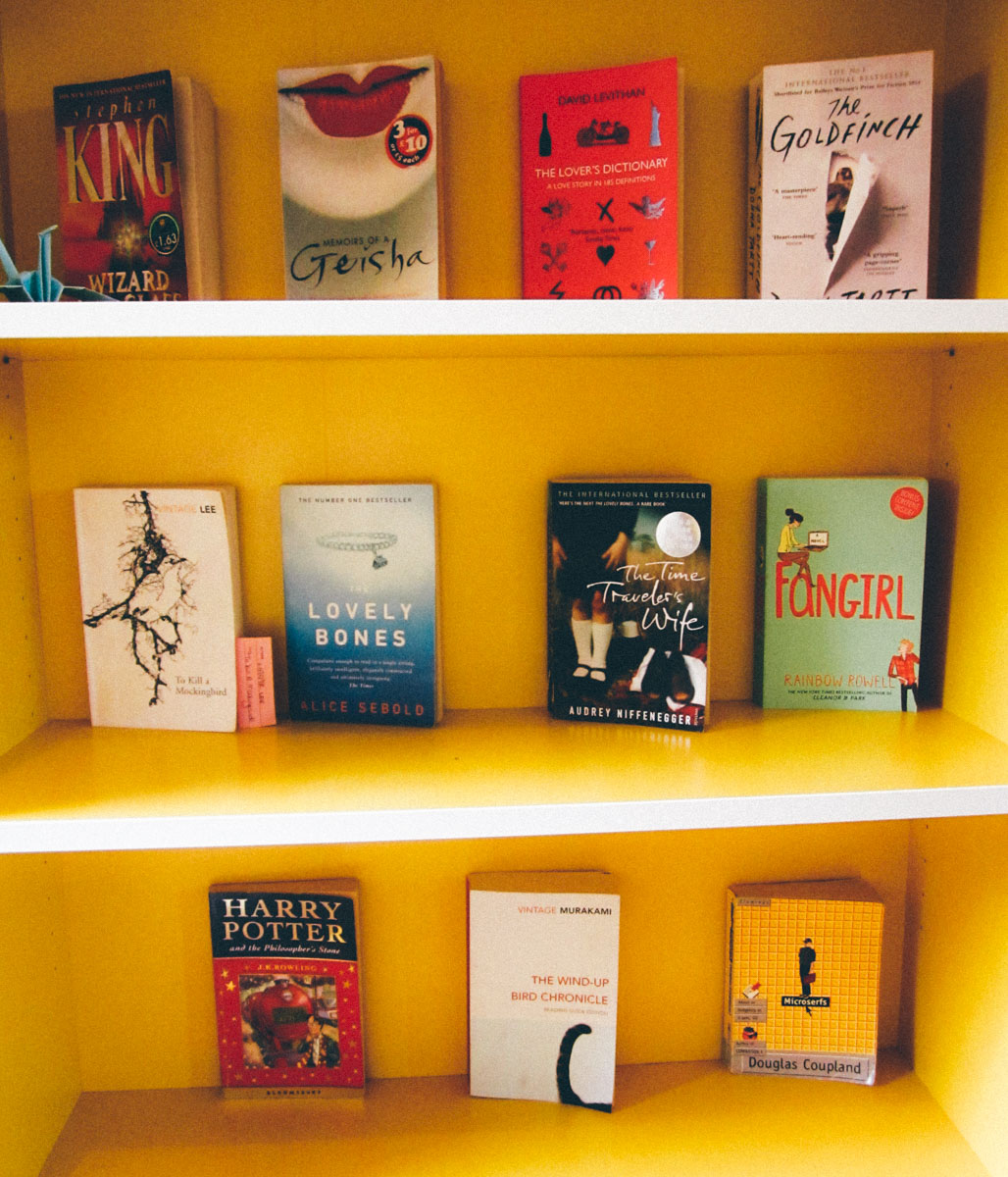 We don’t have enough books to fill all the shelves (yet – so sad, I’ll have to buy more books) so we’re using the yellow shelf as a ‘favourites & recommendations’ shelf. I like it! 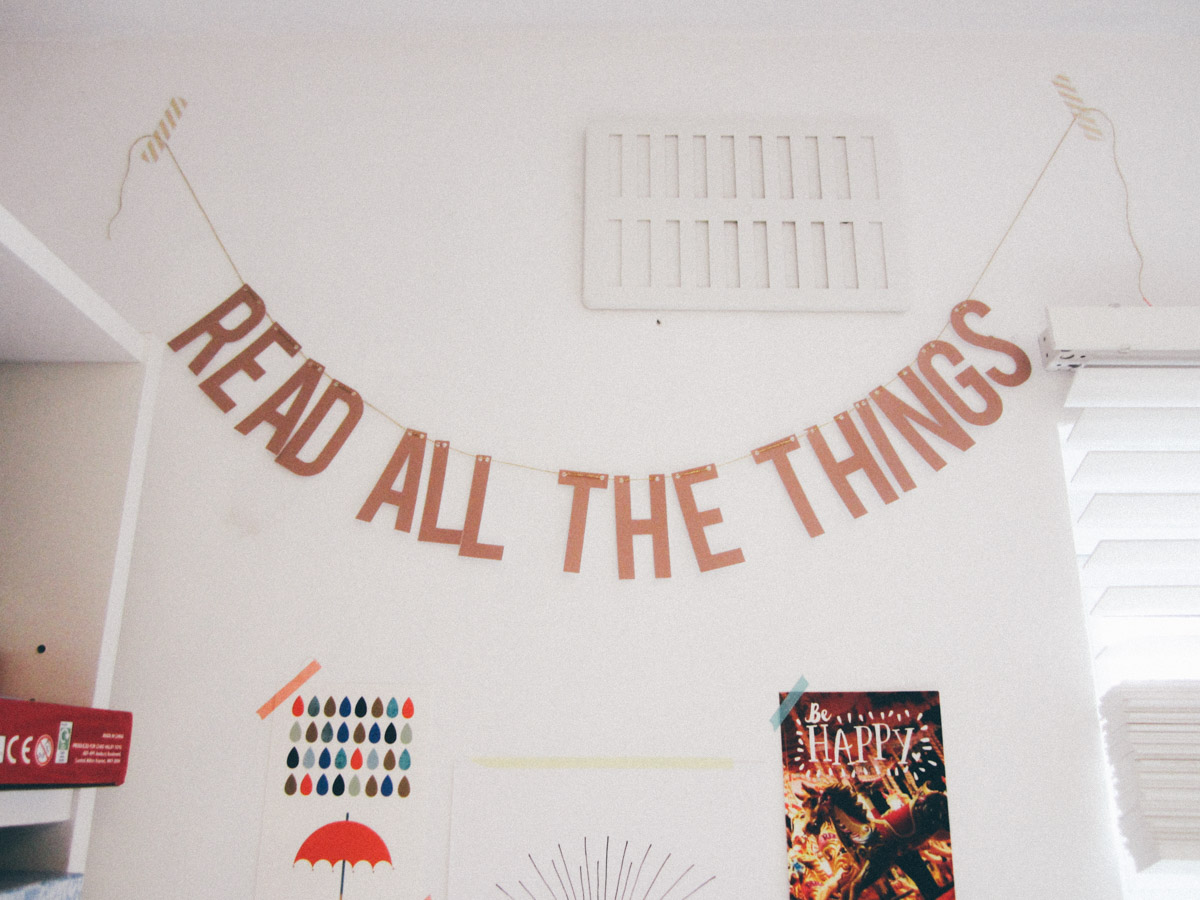 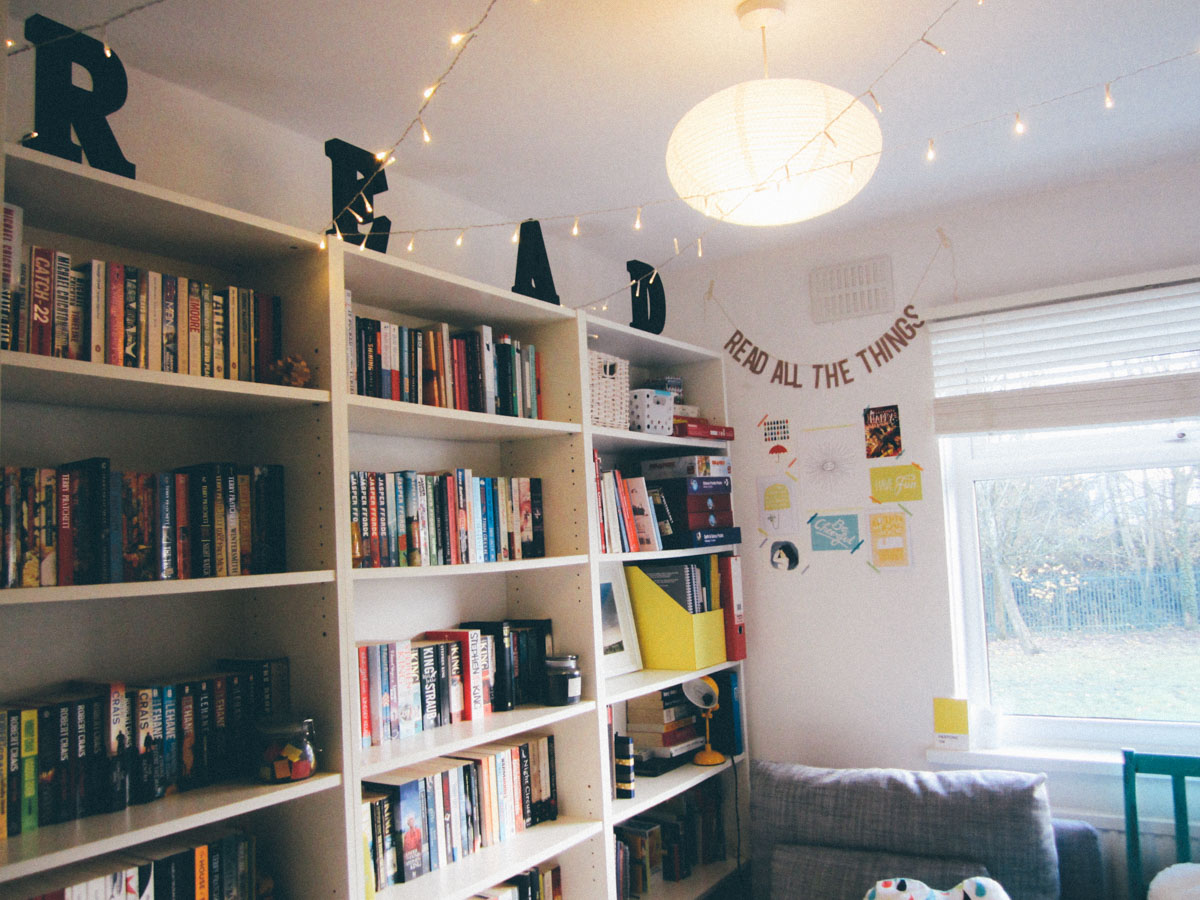 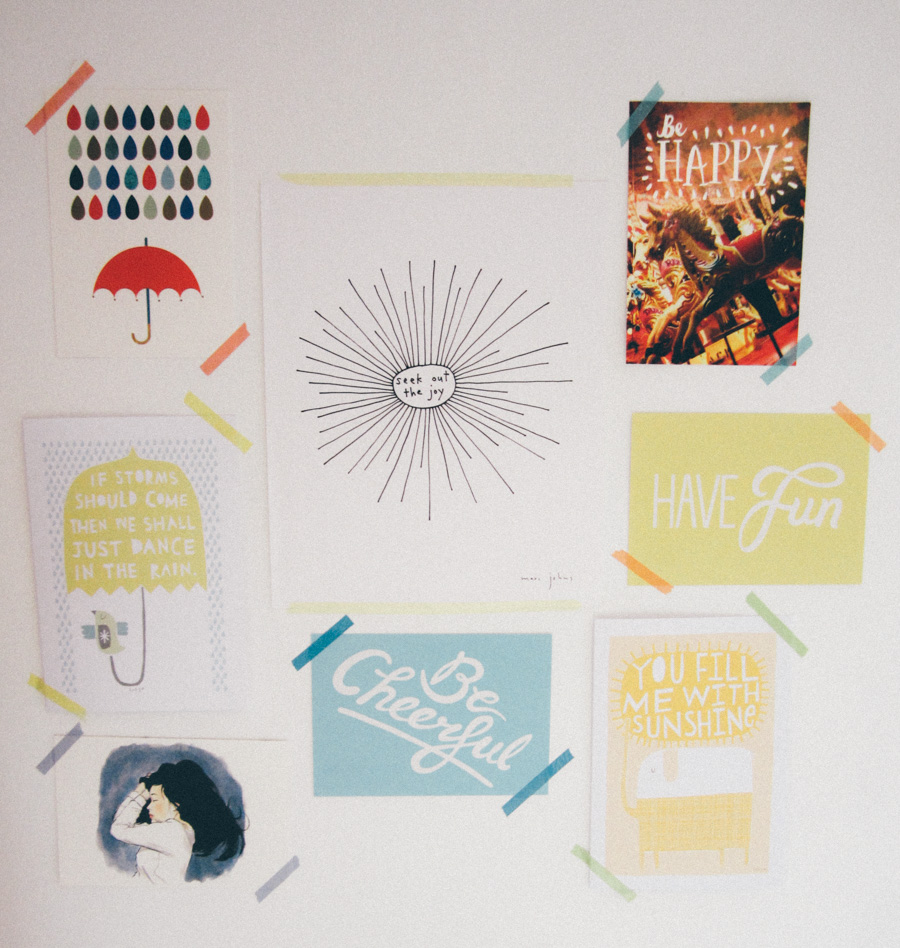 I had a blank wall left so I ordered a ‘Read all the things’ banner from this glorious Etsy shop and taped up some more postcards around my favourite Marc Johns print. (You might remember that I also have it as a tattoo). 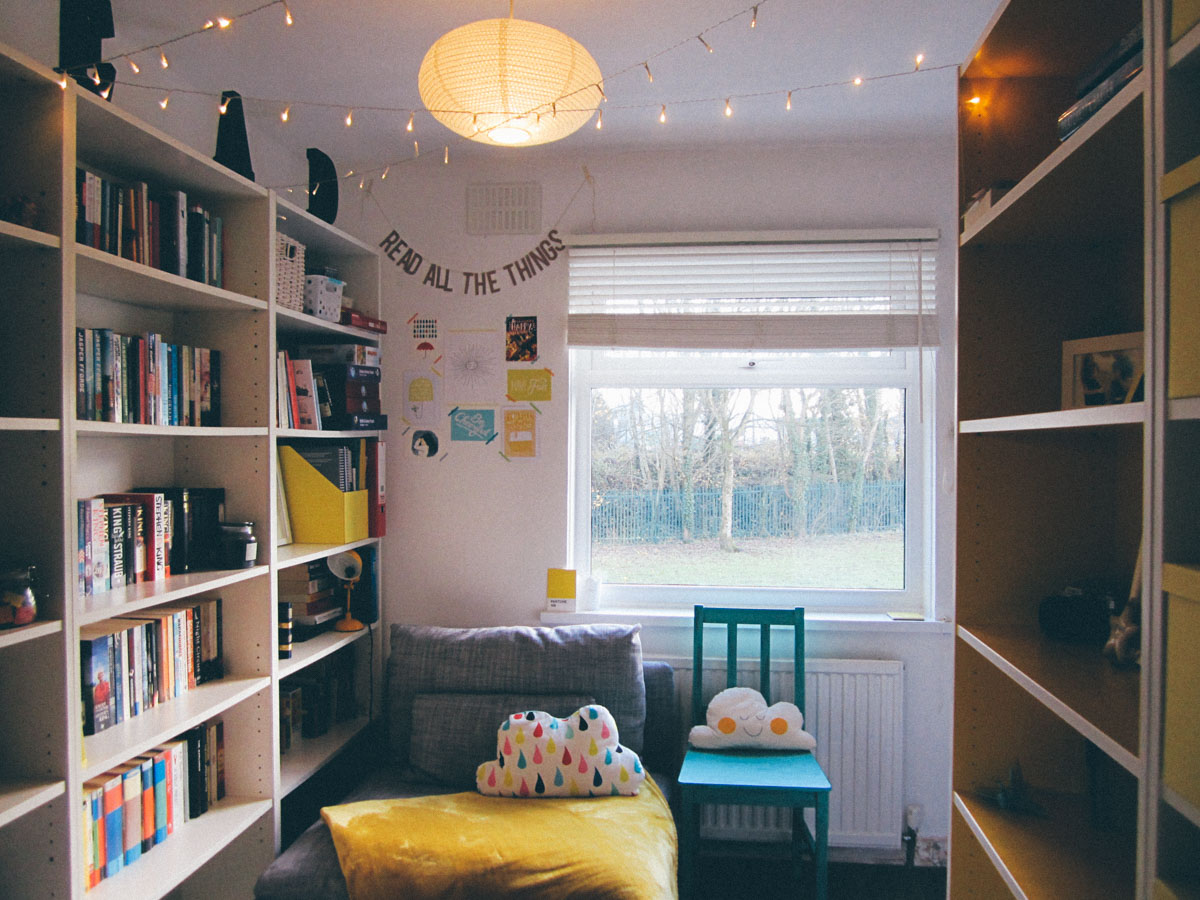 Sigh. Welcome to the world, little library. I’m so happy that you’re here.